“Only I keep wishing I could think of a way to…to show the Capitol they don’t own me. That I’m more than just a piece in their Games”

There are spoilers in this review. It is less a review than my need to vent about the things I loved and hated. Feel free to join in the discussion!

I started The Hunger Games at 5pm one day in July.
I finished it by midnight.
I felt like I swallowed the whole story in one gulp. And it was amazing.

This was a book I actually COULD NOT PUT DOWN. I didn’t go out with my family. I changed plans with my friends. I needed to finish it. I felt an insatiable, irrational desire to know exactly what was going to happen. Usually, I don’t read a lot of YA fiction, but I had only heard favourable reviews for this series and couldn’t resist. Reminiscent, in some subtle ways, of George Orwell’s 1984, Suzanne Collins exposes the detriment of a corrupted, twisted, totalitarian government controlling a deteriorated society. It’s a post-America, with the ominous, terrifying Capitol reigning from the center, ruling 12 districts around it. There are no wizards, vampires, illusions, circuses or magic. This book is real, raw, and striking. The Hunger Games is all of the things that a good YA novel should be: violent, shocking, thought-provoking and, of course, there’s always an element of surprise.
It is a YA novel, yet I am 22 and loved this book. An old professor of mine is nearing the age of 50, and admitted that she couldn’t stop reading this book. Humans are naturally attracted to that which defies the norm, and when it’s painted so drastically, we feel necessarily compelled to dive into the picture.
The Hunger Games will grab your attention and not let it go until you have finished the entire series.
Except when you get to the last book. More on that later.

The first book opens on the day of the annual reaping, when the Capitol chooses, in a grotesquely elaborate fashion, 1 boy and 1 girl (“Tributes”) from each of the 12 surrounding districts, to compete in The Hunger Games, a fight to the death (literally) in an arena. They do this to remind the populace that they are in complete and total control, and any act of dissent will not be tolerated. They have the power to take your children and have them slaughtered on national television for the sake of entertainment, and you can do nothing about it. The arena is not a typical arena — it’s specifically designed to adapt to the Gamemakers’ whimsies (those illustrious fellows who dream up the horrors each Tribute will have to face), in which blood is spilled in order to win or even the odds. Alliances are made, then torn apart.

There are two extremes in this book. In the arena, Collins takes us back to the primeval nature of human beings and, outside, in the Capitol, to what has become of us. Which scenario is better? To be in the arena and know that every person in there is, during that time, their true self, or in the Capitol, where a person’s true self is empty and robotic, a human amalgamation of Capitol ideals? The arena and the emotions within it feel real, yet the entire thing is orchestrated and the friendships they make are inevitably challenged by the need to survive. Outside, survival always and ultimately depends on the Capitol. The people of Panem are all pawns in their hands. This book really made me think.

Onto the romantic side of the books: the relationship between Gale and Katniss is endearing. In fact, I am probably in love with Gale. But the situation with Peeta just annoys me, though I realize its necessity for survival. Peeta is almost — almost — too nice and piteous. He is constantly evoking pity from Katniss, which drives her to act in the way she does. I never, ever get the sense that she feels the same way for him as she does for Gale, which is something much more deep-seated and long-lasting. The ending of this book had me dying for more, which is when I started Catching Fire…

And it is not better than The Hunger Games. The second book in the series is good, don’t get me wrong, but I felt like it was a buffer book, the book she needed to provide plot development and background info for the finale. There’s one of these in every series. This is why this portion of my review/rant is not very long. However, it is brilliant in that the plot is constructed in such a way that it is impossible to guess what will happen next.
Synopsis: Katniss and Peeta return to the arena. President Snow gives the order to hold the Quarter Quell, a showdown between victors of past Hunger Games. However, there is something that everyone, except Peeta and Kitness, know — a rebellion has begun. You’ll find out in the last few pages, where everything you’ve been wondering is explained. It’s annoying, but surprising and exciting.
My favourite character in the sequel: Finnick Odair
Most creative plot element: the arena as a clock (terrifying)
Worst plot twist: Cinna dies. Come on, Suzanne Collins. Come. On.

Regardless, I was very excited to read Mockingjay and still in love with the series… 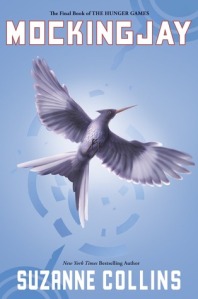 And by the end of this book, I was no longer in love. Collins had an amazing story with relevant and shocking and attractive themes, and she could have done so much with it, but she completely ruined the last book. Mockingjay begins in District 13 (it exists!), the hub of the rebellion against the Capitol. Panem is at war, and President Coin of District 13 is at the forefront. We discover that Katniss was rescued from the arena in Catching Fire because they want her to be the “face” of the rebellion. Peeta, instead, was left to be captured by the Capitol and tortured. I expected so much from this book. I expected an epic battle between the rebels and the Capitol, a grand finale, clear decisions and strong wills.

Instead, we see Katniss as a mentally-withering, high-strung, emotional basketcase hooked on painkillers and wandering around in a dreamy, half-present state. She remains a pawn in the hands of the government, and has little moments of dignity and power — and even those, she cannot execute freely. There are many, many pages of self-loathing, incessant reflection, and uncharacteristic uncertainty. Katniss, in the beginning, was strong and assertive, her own person. In this book, she is fighting for her life in a costume that is provided for her, for a series of propaganda shoots. Everything she does is a direct result of someone’s manipulation on her. She has no choices.

I kept waiting for a moment of clarity, strength and true rebellion, and it does not happen.

I was unhappy with the way Collins constructed the final book. It is bleak, bloody and hopeless. Even the rebels, who are fighting for justice, are portrayed as brutal and merciless. I realize that there is no distinct line between good and evil, and one is often synonymous with the other, but it all could have been presented in a better way. They are fighting with good intentions, for a real reason, and yet Collins makes it seem like even those battling for social justice are evil, and to fight is pointless. There are no heroes in this book, there’s no satisfying conclusion.The final battle is completely skipped over and not described or discussed at all. There are 2 pages after-the-fact that summarize, practically in point form, what happened. Katniss, conveniently blacks out (*cough* COP-OUT).

Also, Prim dies. This was as pointless as every other death (and there were MANY) that occurred in Mockingjay. Thanks for negating the entire purpose of Katniss’ sacrifice for her, the series, and the rebellion? Finnick’s death? Ridiculous. Gale leaving? COP-OUT. This is what happens when the author wants to quickly finish up the book — they leave loose ends, hanging questions, and disappointed readers. Gale literally disappears without warning, without any emotion from Katniss, and finds a job in District 2. It is not possible to end a friendship/love that has been building up throughout all three books so abruptly. They should have been together. Gale is strong, resourceful and understands Katniss on a different level. It is also unlike the character that Collins painted of him to suddenly and carelessly leave, when he spent the better part of the first books doing everything he can to stay and provide for Katniss and their families. Clearly, I am upset with the ending. Instead of moving on to happiness, self-fulfillment and bigger/better things after defeating (I guess) the government, Katniss returns to her old life in District 12, full of self-reproach and depression. She complies with what everyone wanted of her, the easiest choice, and falls into a predictable life with Peeta out of pity — she did not choose it. Katniss was at first inspirational, and she later turns out to be more weak than when the Capitol was in power.

Is Collins sending out a bleak message of hopelessness? That no matter what you do, you will never win? Somehow, I don’t think that’s what she intended to convey to young readers, but that’s the message I got.